Since the start of the conflict in Syria in March 2011, more than 6.5 million Syrians were displaced and another 3 million became refugees in neighbouring countries such as Turkey, Jordan, Lebanon and Iraq (figures from October 2014). According to UNHCR 3.2 million Syrians are now registered with the UN refugee agency; half of them are children below the age of 17. In some countries the influx of refugees has raised serious challenges to the abilities of governments, NGOs and international organizations, to provide the needed services such as food, shelter, education, and health.

In Lebanon, according to UNHCR, the number of Syrian school-aged children will exceed the number of Lebanese children who were enrolled in the public system in 2012. Eighty percent of those children were not in school as of September 2013. In addition to this, drop-out among Syrian refugees is twice as high as the national average. In Jordan, the situation is not much better with 56% of Syrian children not enrolled in school.

Aerial view of the Zaatari refugee camp in JordanThe inability of the educational infrastructure to cope with the influx of refugees is compounded by the lack of adequate funding, the lack of trained teachers, the need for transportation, and the need for specialized services for children with disabilities. Other challenges also include the differences between the Syrian and Lebanese or Jordanian curriculums. In particular, in Lebanon, Syrian children have to study science and mathematics in either English or French while in Syria teaching is done exclusively in Arabic. Furthermore, children who have missed school for more than two years (usually older than 12) are more difficult to reintegrate into the education system since they are older than their peers. In addition to this, a large number of children are obliged to work in order to sustain their families.

Facing all these challenges a number of initiatives are being developed with the objective of alleviating the impact of the conflict on young Syrians. The ‘No Lost Generation Initiative’ is the largest among them. The initiative was launched in October 2013 by a consortium of UN agencies, governments, NGOs, and donors. Since then, numerous countries and organizations have pledged funding and the results are promising. Over the last year, 770,000 children received some form of education and more than 660,000 received psychological support. Enrolment of Syrian children in neighbouring countries has increased from 169,500 in 2013 to 489,000 in 2014. Now the major challenge facing the initiative is ensuring the sustainability of its funding. 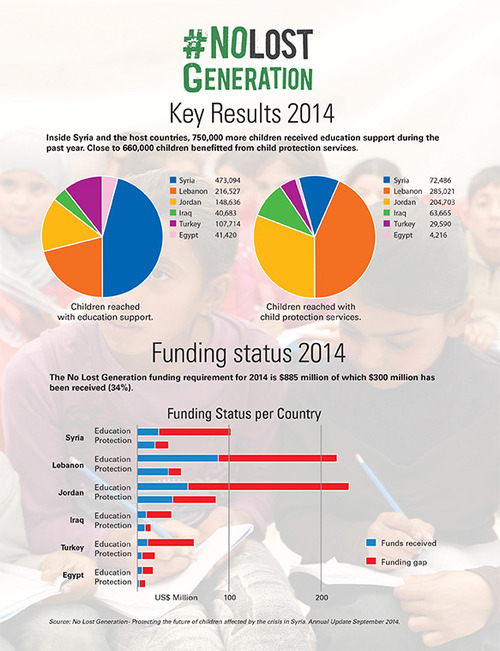 For more information on the situation of Syrian refugees refer to:

The World Bank’s report on Syrian refugees in Lebanon.

The UNHCR’s report on the countries hosting Syrian refugees.

The different reports of the No Lost Generation Initiative.

Save the Children’s Untold Atrocities: The Stories of Syria’s Children.