To impute or not to impute? A practical guide for handling missing data in longitudinal surveys. George Ploubidis.

Maximising the plausibility of the Missing At Random Assumption: Results from the 1958 British birth cohort. Tarek Mostafa.

How well do methods that assume data are Missing At Random perform when the missing data generating mechanism is not ignorable?  Evidence from the 1958 British birth cohort. Brian Dodgeon. 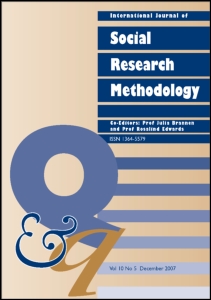 This article was first published in the NCRM newsletter (Summer 2015).

Household surveys are increasingly being linked to administrative records with the potential of greatly enriching survey content on subjects such as health, education and income. One major challenge to data linkage is nonconsent. Non-consent occurs when respondents refuse permission to link their administrative records to their survey data. This problem inevitably leads to information loss and possibly bias if consent is correlated with key characteristics of the respondents.

Despite the recent developments in the analysis of consent [2, 3, 4, 5] the evidence is still scarce. The existing literature focused on the patterns of consent arising in cross-sectional surveys and very little is known about consent behaviour over time. Our study is one of the first longitudinal explorations of consent in the context of attempts to link survey and administrative data. It relies on a theoretical framework which distinguishes between passive, active, consistent and inconsistent consent behaviour and uses a series of models including multivariate probit analyses in order to identify the nature of consent as a latent trait and linear probability models which include interviewers as fixed effects.

The study exploits three consent questions to link health records held by the National Health Service (NHS) to the Millennium Cohort Study (MCS). The questions correspond to waves 1 (age 9 months), 2 (age 3 years) and 4 (age 7 years) of MCS. The questions are: To what extent is consent behaviour consistent over time? and Can consent behaviour be described as active or passive?

In order to answer the questions Cialdini’s [1] framework on compliance in survey research is developed by testing four scenarios which sub-divide consistency/ inconsistency in consent behaviour along the lines of activeness/passiveness. Active consistency is the case where respondents are aware of their previous choices and are committed to make the same choices on future occasions because of stable beliefs or personality traits (e.g. belief in the importance of scientific research, being a private person, etc). Passive consistency is the case where respondents make consistent choices over time even though the decision making process is passive. This means that consent decisions do not reflect an active adherence to well-defined beliefs but rather external influences such as the respondents’ circumstances at the time of the interview and the impact of the interviewers. Active inconsistency is the case where respondents are aware of their previous choices and intentionally behave in inconsistent ways. This change in behaviour could be the result of a change in convictions. For instance, a past consenter might actively decide to withhold consent after a breach to data confidentiality. Passive inconsistency is the case where respondents switch from consenters to non-consenters or vice versa. This switch is not the result of changes in convictions but rather the result of changes to the circumstances of the respondent (e.g. divorce, acute health problems), changes to the interviewers over time (e.g. persistence in pursuing consent), and the fact that respondents could have forgotten what they did in the past. In all cases, the respondent has a passive role and the changes in consent behaviour are caused by extrinsic factors.

In summary the analyses provide evidence in support of passive consistent behaviour. Firstly, 77% of respondents behaved consistently over time by either consenting or refusing to consent in all waves. Secondly, the cross-equation correlations from the multivariate probit models showed that the unobserved parts of the consent outcomes are weakly associated over time, and therefore, cannot really be held to indicate the existence of strongly held latent convictions about consent. Thirdly, the likelihood of consent and the likelihood of switching behaviour over time are related to the respondents’ circumstances, and to the variation the impact interviewers have on the respondents’ willingness to consent. These three findings indicate that, for the majority of respondents, consent is not driven by personal convictions but rather depends on the circumstances of the respondent at the time of the interview and on the potential influence of the interviewers.

In sum when it comes to using linked survey and administrative data, users need to take into account the potential sample bias resulting from the correlations between the respondents’ characteristics and the agreement to consent. On a practical level the longitudinal evidence based on our project suggest that it is important to brief interviewers about what to expect and encourage them to adapt to the respondent’s circumstances when attempting to gain their cooperation to consent to record linkage.